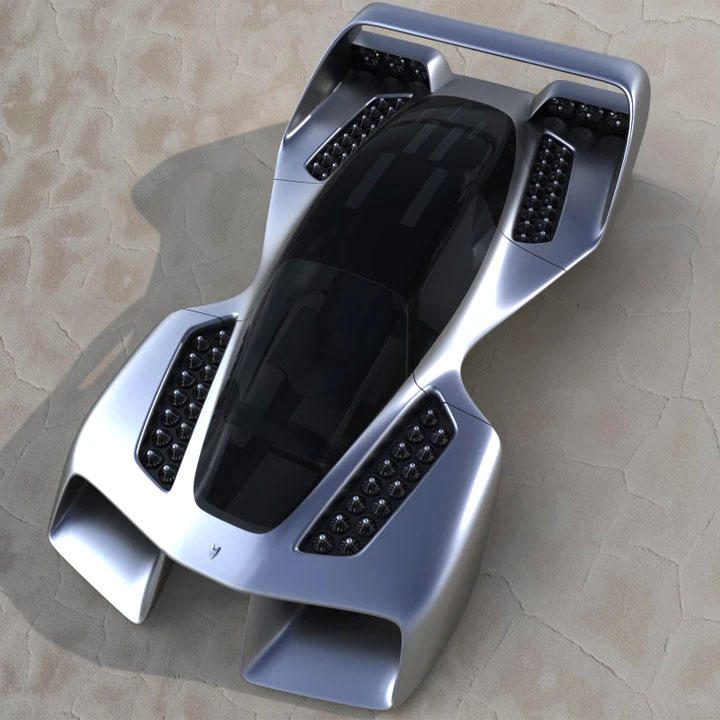 Urban eVTOL Leo coupe is a flying sports car that you can park in your Garage. The brainchild of Pete Bitar and Carlos Salaff founders of the company Urban eVTOL, the flying coupe promises to revolutionize the way we travel in the near future. The Leo Coupe is a three passenger eVTOL aircraft with a maximum speed of 250 mph (400 km/h), and with range of 300 miles (483 km) and a flight time of about 1 hour and 15 minutes.

The aircraft features 16 ducted fans for VTOL fight and 6 ducted fans for forward flight. It’s unique double box-wing configuration not only makes the aircraft look futuristic but significantly improves its aerodynamic efficiency. The design takes safety as a top priority with the ducted fans tucked away into the vehicle body away from passengers entering and exiting the flying car and away from persons on the ground.

The design features large windows with unobstructed views of the outside and a transparent floor that allows passengers to feel like they are riding on air. The vehicle’s dimensions of 10 ft x 20 ft (3.05 m x 6.1 m) approximately the same size as a full size sedan, allows it to fit snuggly inside a standard garage.

For safety the aircraft features multiple redundant systems, multiple propellers and motors on the aircraft to backup if one or the other fails during flight, a concept known as distributed electric propulsion (DEP). In addition, an whole aircraft ballistic parachute is included for emergency situations with retro rockets to help decelerate the aircraft parachute on descent.

The company’s goal is to build a full scale technology demonstrator and have it in the air in 2022. With investor support, the company hopes to build a second full scale prototype made of carbon fiber which it hopes to be in the air seven to ten months after receiving full funding. Urban eVTOL foresees a future where the Leo Coupe will become the primary means of urban transport, moving people from suburban garages to downtown areas. With parking being a major roadblock in downtown urban areas, the company has designed a vertiport named the Vertistop which will store the vehicles and can be easily integrated into downtown city infrastructure.

The flying car will be FAA certified and sold as partial build kits with anticipated build times ranging from 20 to 40 hours. Kits will be for personal use with a price tag of around $300,000 per vehicle. Future applications for the flying car include fire rescue, medevac, police, tourism, commercial transport, and of course military.