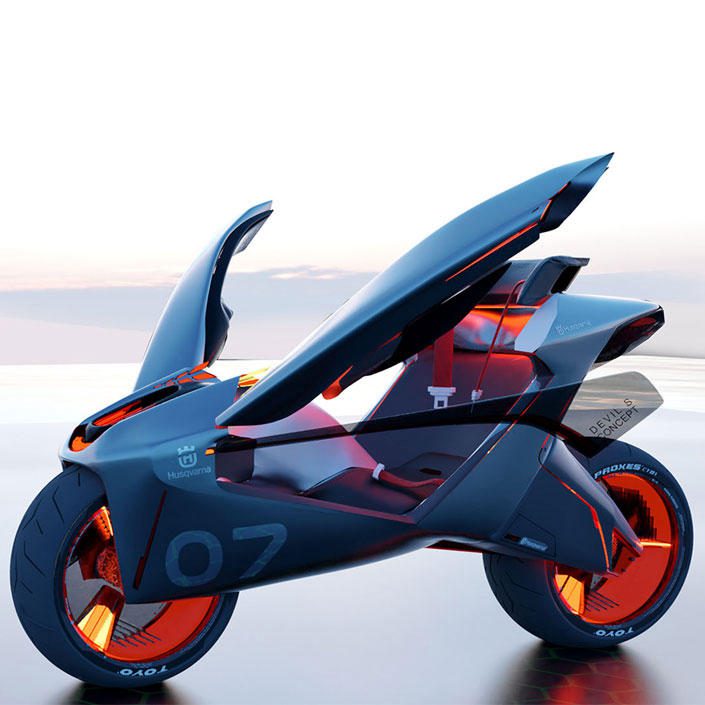 Haochen gives his idea wings in the form of the Husqvarna Devil S Firefly-Inspired Superbike Concept, imagining how the dimension of mobility would change in the next years.

Motorbikes are sometimes labeled as dangerous since they expose the rider’s body to high-speed hazards in the event of an accident. Two-wheelers are known for their wide stance, which appeals to the younger generation and adds to the adrenaline rush. Above all, the ride should be fashionable and reflect the tastes of the youthful population. Haochen (Wenson) Wei was motivated to create a radical motorcycle that would embody all of the above.

The rider sits in the Husqvarna-branded bike like he or she would sit in a vehicle, and the doors open upwards in the shape of a firefly. These elegant doors envelop the rider in a protective cocoon that keeps the rider safe at high speeds. The bike retains its edgy appearance while doing so, making it ideal for a futuristic ride that young people would find appealing.

The Devil S Concept’s interiors are designed to meet the demands of the rider, with all telemetry and essential information displayed on the front side panels. The designer wants this futuristic bike to be just as capable on city streets as it is in the vast stretches off-road. A two-wheeler like this is sure to turn heads – precisely the ideal formula for young people who want to stand out.

The Devil S’s side profile is really wicked, with a well-balanced visual appeal. The rider sits quite low on the bike since the seat is secured by the bike’s lightweight yet robust structure. I’m hoping for airbags as well, as there’s plenty of room for them in the cramped cabin. Would this bike appeal to a tough bike rider? Probably not, but every new product needs to deal with some resistance before it becomes mainstream, right?