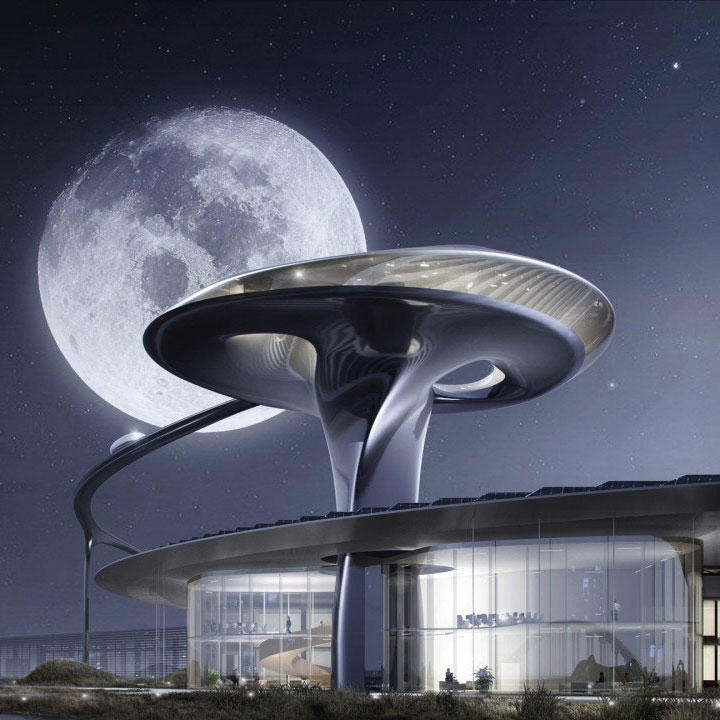 Faraday Future, a new electric car company based in California plans to move from its current headquarters in Los Angeles to its new futuristic headquarters designed by Chinese Architecture Studio MAD in Northern California.

The new 130,000 square-feet campus is planned for a former navy base on Mare Island located north of San Francisco. MAD’s proposed design for the campus can be simply described as otherworldly borrowing from shapes and technology of futuristic electric vehicles.

Blending Faraday Future ambitious goals, MAD designed a complex that is compelling with a signature structure that looks like an Alien Spacecraft or something resembling the head of the Alien from Tom Cruise film, War of the Worlds.

The design team led by Architect Ma Yansong came up with the design that comprises of two low, metallic structures immersed within the site’s prairie like landscape. A series of interlinked office buildings with a total of 20,000 square-meters will be arranged in a circular plan with courtyards and passageways carved in between.

The signature structure as described earlier is a reflective observation tower that will rise above the aforementioned office buildings. It will house a “user experience center” for visitors providing a vantage point for potential customers to see electric vehicles being moved from warehouse up to the tower along a rail track.

The roof of the building will be entirely covered with photovoltaic solar panels and coupled with wind turbines on the tower will produce enough energy to run the entire campus.

The entire structure from its large roof overhangs, operable glazing and internal courtyards is designed to be energy efficient, promoting natural ventilation and minimizing energy usage.