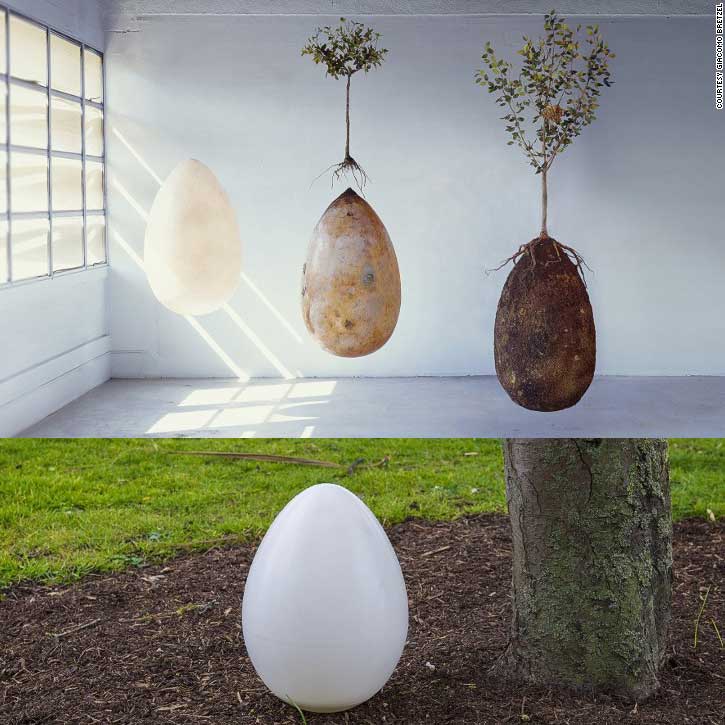 The biodegradable burial pod reincarnates your body into a tree!

A pair of Italian designers intends to revolutionize the way we bury our loved ones with the biodegradable burial pod.  The project called “Capsula Mundi” (World’s Capsule) in Latin is an egg-shaped biodegradable, organic casket that will hold the ashes of your cremated loved ones and in the near future the actual body in a fetal position.  Once buried the biodegradable plastic shell breaks down and the remains provide nutrients to a tree which will be planted directly above the buried pod.  The noble cause is meant to reduce the financial cost and environmental impact of traditional ways of burial on the environment.  Traditional burial method across the world are primarily earth burials, tomb burials and cremation.  All three methods require significant natural resources such as trees, concrete, steel etc. which are expensive and require a lot of energy to produce and end up being used for a short time then buried.  According to Jennifer DeBruyen, an Associate Professor of Biosystems Engineering and Soil Science at the University of Tennessee, these materials do not break down very fast and end up polluting large swathes of land space.  Furthermore, cremating bodies requires large amounts of energy and can release very toxic mercury from dental fillings and other pollutants into the environment.

The designers Raoul Bretzel and Anna Citelli, believes that death is closely related to consumerism as life and their ultimate goal is to create a product where every aspect of the burial process is absorbed into the environment and provides nutrients to newly planted trees.  If the designers vision becomes reality, we may soon see cemeteries with endless rows of trees instead of tombs and tombstones. The designers are launching the first version of the burial pod which will be used to bury ashes only.  A later model to be introduced in the near future will be suitable for burying bodies encapsulated in the fetal position. Planting a tree on top of the burial site to capture the nutrients and benefit the overall environment sounds like a good idea to DeBruyen, who argues that the problem with traditional burial is that it is completely anaerobic meaning that the remains are buried deep and sealed in a wood or metal coffin which inhibits complete degradation.  The pods may help maintain oxygen flow into the system and introduce carbon from starch-based bioplastics which will aid microbes in decomposing nitrogen rich bodies.  A human body will completely purge in a buried environment within a year and the nutrients released into the soil would be quickly absorbed by a large tree planted on top of the burial site which may also aid in protecting groundwater supply.

DeBruyen believes that there is enough science and agreement that this form of burial represents a really viable option for afterlife.  As science research continues to introduce green solutions to many of our day to day activities that impact the environment in a negative way, it’s only natural that a green solution would also be found for the end of human life.  While this form of burial is legal in Canada and the United States, overcoming municipal and state burial laws in other countries will not be easy.  The greatest obstacles to overcome to ensure that the “Capusla Mundi” becomes the preferred form of burial worldwide would be ethical, religious and cultural but its designers believe that increased scientific research and environmental awareness will eventually break down those barriers to green burials.